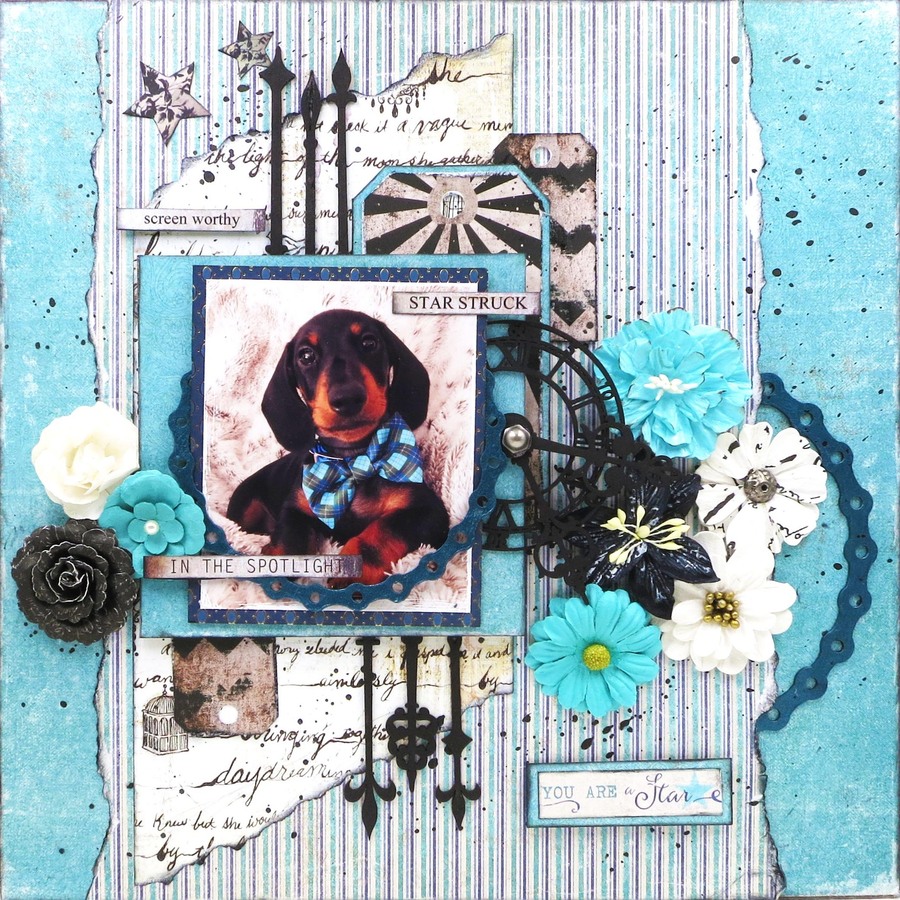 You Are a Star

Hello Dear Scrappy Friends!!  Hope you are enjoying your summer!!!  Ours has been pretty spectacular.  I have a special layout to share today of the new addition to our family.  Charlie has finally arrived!!!  He is such a sweet and fun little guy!!!  He LOVES to cuddle.  I am in puppy heaven filled with lots of puppy kisses.  I received my inspiration for this layout from my dear, dear friend Rachael Funnel, who is a former DT partner on another team.  This is a lift of her recent layout “Handsome” which you can find on her blog

I used the Maja Paper Collection “Boys and Denim” and added some old Prima “Epiphany” with a little 13 Arts and some of the Anna Griffin Masculine Paper Line.  I used everything but the kitchen sink.  First I used one of the 3 Bicycle Chain Frames chipboard around the photo which I painted in a dark teal acrylic paint (4 1/2″).  I use Prima Art Alchemy Acrylic Paint whenever possible.  This shade is “Stormy Ocean” so yummy!!  I used the 5 1/2″, cut it in half and tucked it in between the papers on the right side of the layout.

Between the photo layers and the mats I inserted the Large Clock Face 3″.  I actually used Ranger’s Black Archival Ink.  I simply rubbed the chipboard onto the pad until the chipboard was fully covered.  It’s a great technique for getting smooth texture on chipboard without brush strokes.

Here’s a closeup of this angle.

Next I added all the gorgeous flowers to soften the layout, after all he is still a puppy.  He is only 10 weeks old in this photo.  Such a sweet little guy.  Doesn’t chew on the wrong things, goes potty on his astro turf pad, doesn’t bark, except at the kitties.  He’s perfect…..now.

Next I used the Large Clock Hands as vertical accents coming out of the photo.  I used the Ranger Archival Ink treatment on these as well.  Love how these turned out.

Hope you enjoyed Charlie’s layout.  One of many to come, I’m sure.  He is so much fun.  Again, many thanks to Rachael Funnel for the inspiration.  Well, I’m off for now, be sure to stop back by.  For now stay safe and healthy and here’s a BIG Alaska Bear Hug.