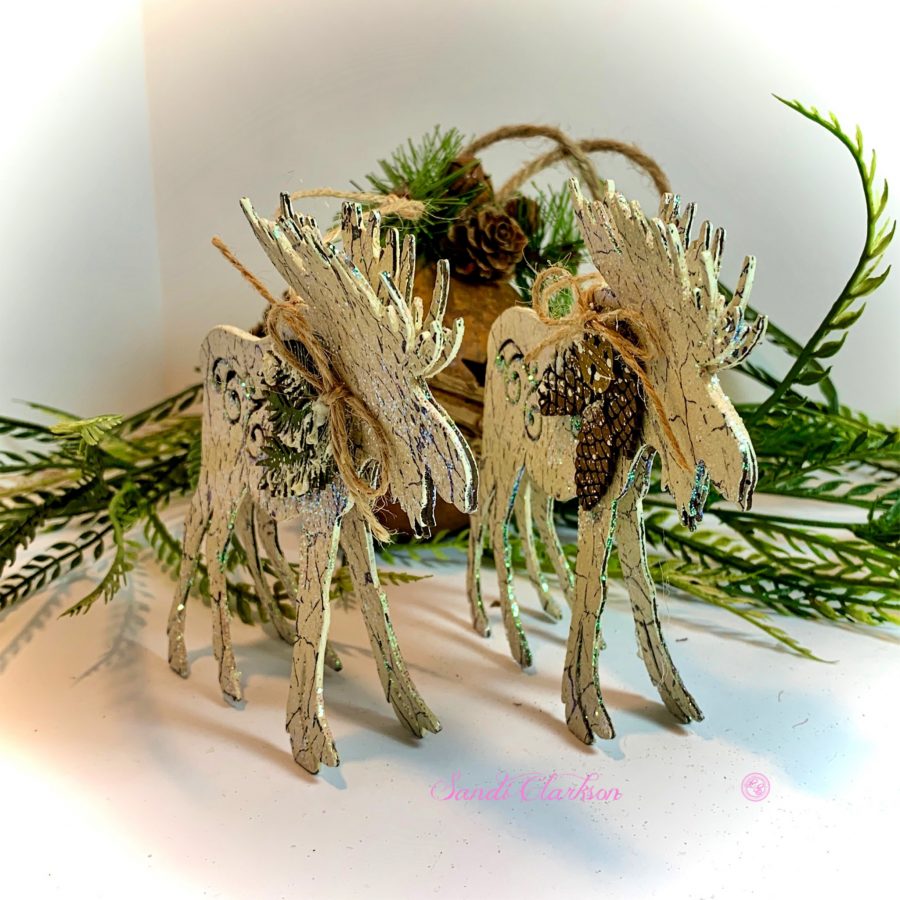 Christmas in April with Sandi Clarkson

0 241
1
April 17, 2020
1 Min Read
Hello, crafty friends!
Sandi here with you today sharing a “Christmas in April” project.
I know … you’ve never heard of Christmas in April.
Well, neither have I but the deal is that I asked Nicolle late last year if she could design some “moose” chipboard similar to some cute moose ornaments that I purchased from the local craft store.
I’ve been doing a woodland theme the past 2 years and am figuring that I will do the same this Christmas because they are neutral and oh, so cute!

Each Moose set has 2 pieces in it, so I’ve actually used 2 sets.
You’ll need one set for each moose that you create if you glue them together as I did. Of course, you can also use them as single pieces for other projects.
I first painted both sides of each chipboard with antique white craft paint. When that was dry, I used the Distressed Crackle Stamp and black ink to give the moose some character.
After the stamping was done, I coated them with Honey Medium for shine and sprinkled them with 13 Arts iridescent glitter. As you can imagine, my whole house now sparkles! Ha!

Next, I glued two moose pieces together, only gluing the head portion (not the antlers) and along the top of the back of the moose. I used a canvas stretcher to hold and separate the lower body and legs.
I decided that the moose looked a little too plain, so I added some bits from the Pine Cone Clusters and  adhered them around the neck. For one of them, I added a painted jingle bell from the Antlers set.
A twine bow was added on each.

After they were good and dry, I used my crop-o-dile to make a small hole where I could run some twine to create an ornament hanger.

As you can see, I split one of the Pine Cone Clusters into 2 pieces and used the foliage portion on this guy.

Each moose has an unembellished side but you could decorate it also if you wished.

I’ve included this photo to show you how the antlers are bent and separated for a more realistic appearance.

Here is a photo of the canvas stretcher which I used temporarily between the two pieces until everything was good and dry. You could actually leave it if you wished, in which case, you might want to paint it or use something fancier.
That’s it for today!
Thanks for coming by.
See you next time.
Sandi

“The Best is Yet to Come” ~ new layout with Sandi Clarkson

“End of Summer” Canvas Board with Sandi Clarkson ~ new

Cat and Dog Shaker Cards – For All Those Pet Lovers