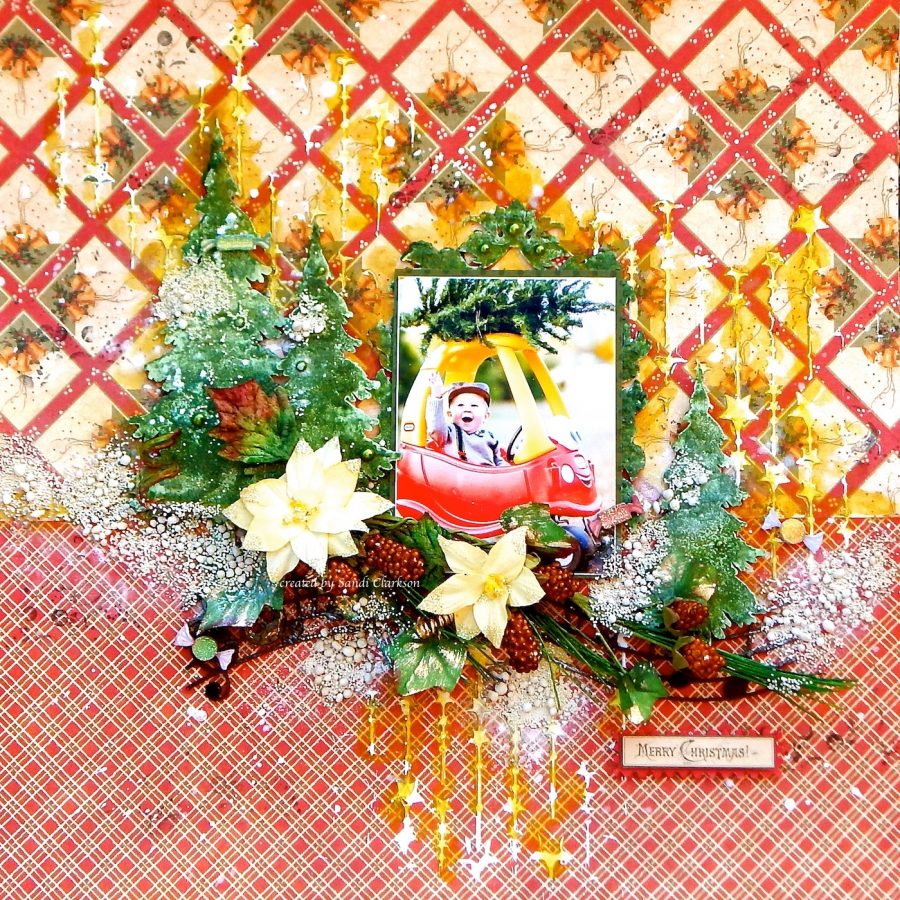 0 259
2
December 12, 2018
2 Min Read
Hello, scrappy friends!
It’s Sandi Clarkson here with you today sharing a new Design Team layout created using Creative Embellishments and  Shimmerz Paint.
This adorable photo is of my cousin’s grandson taken a few years ago. She reminded me of it a couple of months ago, so I put it on to-do list for this time of year.

I wish the photos could do justice to just how pretty and shimmery this layout is truly is.
My background papers are some older Graphic 45 Christmas papers that went well with my sweet photo.
My background was prepared with clear gesso and then I added some super heavy gesso pushed through the CE Falling Stars Stencil. The colorizing around the photo cluster was done later with my Shimmerz Vibez Rolling in the Hay. It’s a darker, more vintage gold than Vibez Glorious Day. It really adds just the right amount of oomph to my cluster.

I had just received the CE Tall Trees chipboard in the mail and thought they would be perfect for this project! I altered them with Shimmerz Green Olive original paint and then lightly sprayed them with Vibez Palm Reader for a little more glimmer. Later I went back and splattered everything with Vibez Snow Storm which gave a snowy look to the entire page  .. even better than gesso. As you can see see, I also added some art stones here and there.

Here you can also see some of the CE Falling Stars Stencil work as well as my random stamping with the CE Circle Bokeh Stamp.

I wanted to frame my photo with more than just cardstock, so I used one of the Creative Embellishments Mint Box Flourish Frame Set 2 and altered it the same way as the chipboard trees for a cohesive look. It was placed underneath the photo so that I wouldn’t lose any photo details.
Just to add a little bling, I added some green flat back pearls to the frame and to the trees.

Another sweet little snowy tree and more stamp work.  You can also barely see the end of the CE Wavy Music Note Border which I altered with Walnut stain. I thought it made a great little “road” for my sweet fella driving his Christmas tree home.

Here is the lefthand portion of the CE Wavy Music Note Border. Also you will note lots of the added art stones which were first sprayed with my Vibez Glorious Day. Later, I decided to spray them with my Vibez Snow Storm instead to make them white like snow. However, the gold edges still show and make them glisten a bit more which I like.

I finished the layout with a very old Petaloo vine that I had on hand. I updated it by spraying the flowers with myVibez Glorious Day. Because I’m trying to use up my old Christmas stash, I added a few 3-D candies and some old buttons. Why, oh why do I have so much Christmas paper?

Thanks for coming by today!

And let me take this opportunity to wish a very Merry Christmas!
Sandi

Always Be Yourself ~ Sandi Clarkson