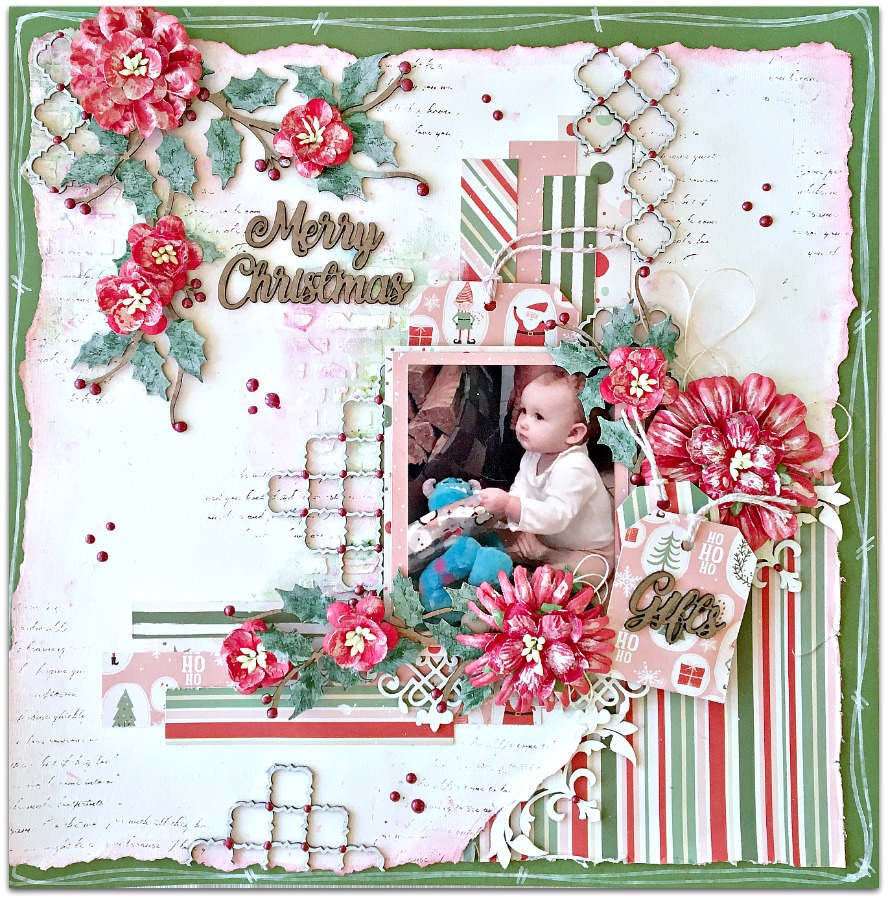 Hi fellow scrappers.. It’s Nanné here to share a Christmas themed layout I created of my grand daughter who experienced her second Christmas this year.. This year being the first year she actually was able to open up her gifts and of course us grand parents had to take a lot of photos..

Here is the layout I created using one of the photos I took her on Christmas day..

She was such a little trooper and was in high spirits the entire time..

We thought she would tire out but nope, she kept on going and her favorite was a baby doll.. She definitely loves her baby dolls.

Here are a few close ups of my layout:

I absolutely love the holly border.. I decided to cut it into two pieces (getting more for my money) and adding one half to the top of my layout and other below my photo mat.. I also added both of the Holly Sprigs to my layout, they added a nice touch not being too long..  I painted my Holly border and sprigs using acrylic paint and then added some drops of red NUVO crystal drop.  I used the Distressed Script stamp and the crackled brick stencil to create my my background.

For the bottom of my layout, I added two of the corner flourish pieces, cutting them both in half as well.. I tucked the top half under the photo mat and then bottom half underneath the flap of the cut away corner piece.

I also used the mini quatrefoil panel, but I cut that into half as well, only using half and for the title and the little tag saying I used the Christmas Sentiments and the Merry Christmas titles.. These two sets are great for mixing and matching words..

My papers are by My Minds Eye and the flowers are by I am Roses and Prima Marketing.

And there you have my Christmas themed layout.. Thank you for stopping by and I hope I inspired you to get those Xmas photos developed and onto some of your favorite scrapbook layouts..

p.s. Here are the chipboard elements, stencil and stamp that I used to create my layout:

From my kitchen to yours