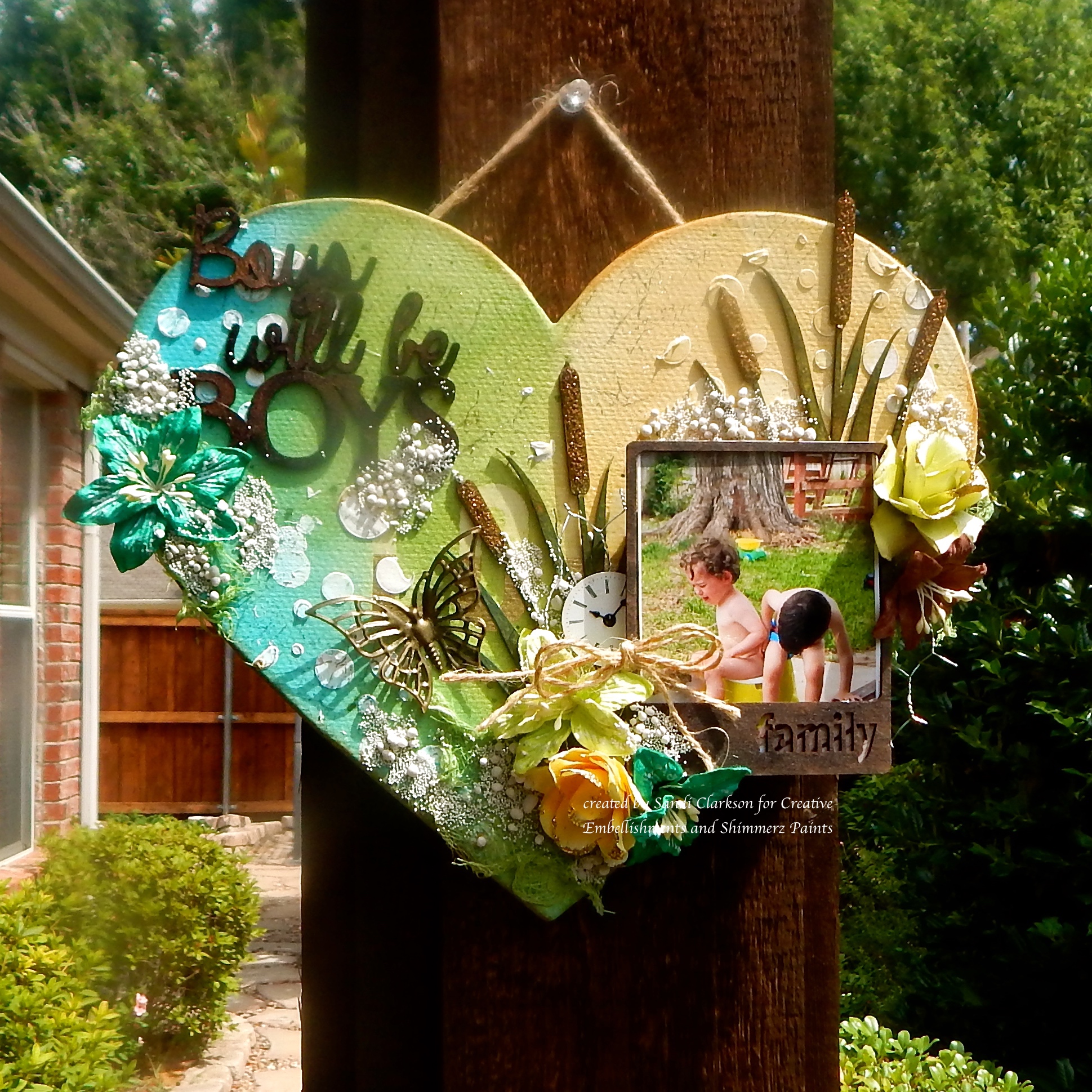 Boys will be Boys ~ Off the Page Canvas with Sandi Clarkson

0 215
1
July 24, 2018
1 Min Read
Hello, fellow scrappers!
Sandi here with you today sharing my favorite project of the year so far … and a joint Design Team project for Creative Embellishments and Shimmerz Paints.

I’ve had this heart-shaped watercolor canvas by Crate Paper for over a year and had not found quite the right use for it .. until the other day.  This cute photo of the grand boys screamed for something unique.

The first step was applying the color to the background which I did with a limited rainbow design. I started on the right with Glorious Day Vibez, then added in Palm Reader Vibez and lastly Well Blue Me Down Coloringz.

After that, I added texture using the Creative Embellishments Circle Bokeh Stencil and super heavy gesso. When that was dry, I re-applied the paints as needed as well as splattered droplets creating interest. For depth I used the Distressed Crackle Stamp around the edges of the heart.

Next I began altering my chipboard pieces. The Boys will be boys was first stained and then hit with Rolling in the Hay Vibez . I seriously love how it turned out!

The Cattails were so fun to alter. You will need 2 of them. First the stems were painted with Green Olive, then blasted with the Rolling in the Hay Vibez and some of the Glorious Day Vibez for a hint of yellow.

I took a cue from fellow CE team member Jen Snyder and pulled out the Stickles for the heads of the cattails which gave them great texture. They were sprayed with Rolling in the Hay Vibez to reduce the shine.

Here they are all done up! Aren’t they perfect? The use of multiple colors makes them look more real, I think.

The sweet photo was framed with the “family frame” from the Together Frame Set. This frame was treated the same as the Boys will be boys title piece but turned out a little lighter, probably due to less stain. I also tied a little jute bow to the side of it.

Behind the photo, I placed a bit of actual chicken wire, then aded my flowers and art stones. Lastly, I used my finger to trace some of the Hot Fudge Vibez around the edge of the heart for dimension.

This was a super fun project to create. Don’t be afraid to use those odd canvases to showcase a treasured photo!

Thanks for coming by today!

Always Be Yourself ~ Sandi Clarkson