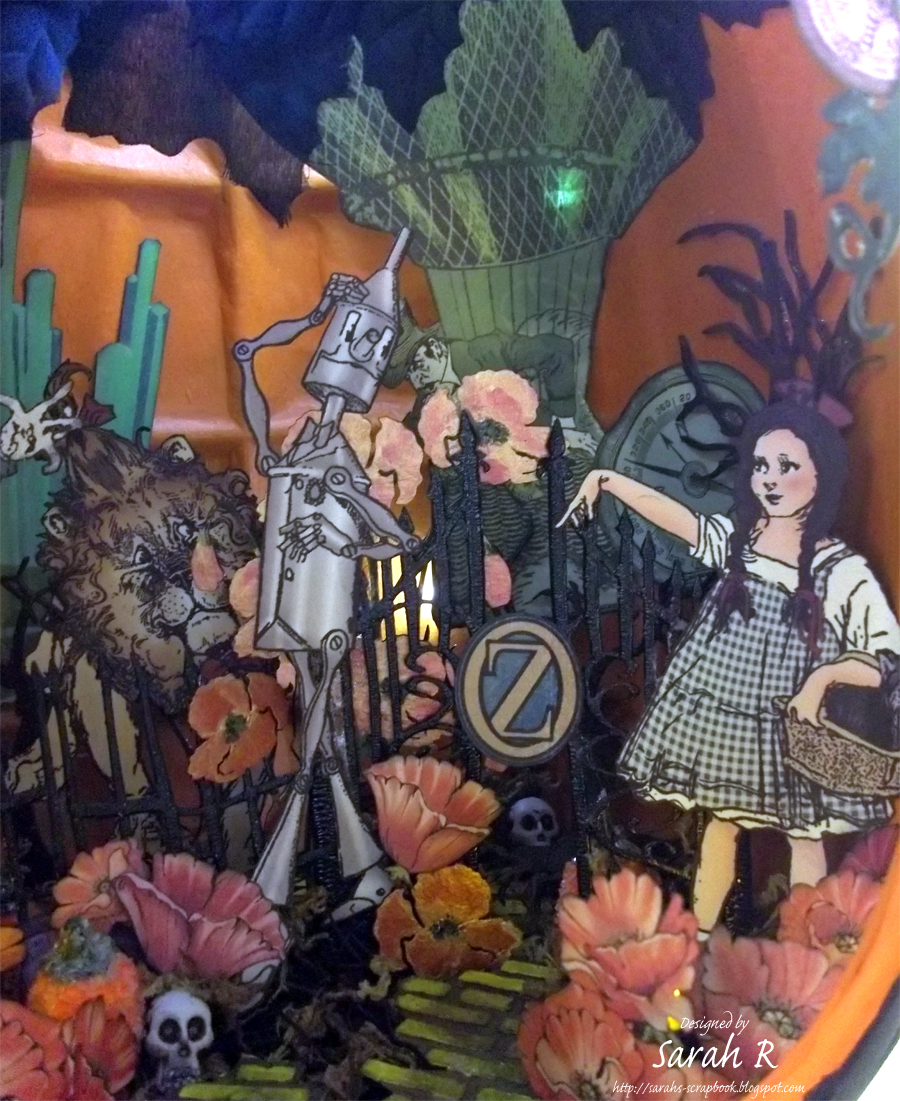 Sarah here today to share a super-fun Halloween project! I have been hoarding my Graphic 45 The Magic of Oz paper in my stash for ages and decided to haul it out and create this Illuminated Pumpkin Shadowbox using fussy-cuts from the papers and Creative Embellishments Chipboard pieces that were just perfect for this project! I started off with an Orange Craft Pumpkin with a Shadowbox cut-out. I painted the outside of the pumpkin with black gesso so I could have a two-toned pumpkin and really draw the eye to the bright orange inside. I added a string of LED lights (hidden at the top of the pumpkin) and two ‘flickering candle’ battery-operated tealights to light up the inside of the pumpkin – this looks so much more striking in real life! The photos don’t do it justice! I also added two cute witch’s legs I found at the craft store under the pumpkin – to look like a crushed witch!

I fussy cut the main characters, along with a bunch of other elements, from the papers to create the scene for the pumpkin. All the papers are inked along the edges with Black Soot Distress Ink. I started building the scene by putting some brown excelsior and graveyard moss in the bottom of the pumpkin. I used the Creative Embellishments Spiky Gate and Creepy Gates as the central elements to start building the scene around. I painted the gates with black gesso and then coated them with Crackle Accents. I also used a Creative Embellishments Poppy Cluster along the gates, which I painted with Art Alchemy Metallique Acrylic Paints in colours similar to the poppies on the Graphic 45 papers.

I fussy cut the Wicked Witch and backed her on black cardstock for stability. I added a glitter pumpkin and small skull from my stash as “steps” for her so it looks like she’s stepping out of the pumpkin. I finished off this section with a black fabric leaf, some graveyard moss and a bit cut from the Creative Embellishments Brick Pieces. I painted the bricks with Art Alchemy Metallique Acrylic Paint in Pure Sunshine and then smudged the Brick Pieces with Black Soot Distress Ink to make them look aged/worn.

Inside the pumpkin, I added the Scarecrow and his “Wanted – A Brain” sign. I made a “Broken Yellow Brick Road” using the Creative Embellishments Brick Pieces. I added lots of fussy-cut poppies and a compass, a small sugar pumpkin and a small skull around the Scarecrow’s feet. The poppies hide the tealight in front of the Scarecrow. I also added a fussy cut Emerald City at the back of the pumpkin so that it looks like the Yellow Brick Road is leading around through the gates to the city.

I placed the Cowardly Lion behind the Spiky Gate and the Tin Man and Dorothy in front of and on either side of the Creepy Gates. I also fussy-cut the Oz circle as a closure for the Creepy Gates. The Wizard of Oz is suspended from the top of the pumpkin in his hot air balloon. I added a few of the Creative Embellishments Creepy Trees – you can see these tucked in behind the lion, in front of the balloon basket and behind the gate on the right side of the pumpkin. The trees were painted with brown acrylic paint and then coated with Crackle Accents. You can see the painted poppy cluster and some more fussy-cut poppies, as well as another small skull tucked in the back behind the Creepy Gates. The poppies in front of Dorothy hide the second tealight.

The title from the main page of The Magic of Oz collection fit perfectly across the top of the pumpkin’s opening. I fussy-cut the title and backed it on some black cardstock – and after cutting it out (again) I inked the edges with Distress Ink in Black Soot. I also fussy-cut some flying monkeys and added them to the left side of the title and added a small fussy-cut compass to the right side.

Thanks so much for stopping by the Creative Embellishments Blog Today!
Hope you’re having a Spook-tacular October!